On Wednesday November 4th, gradireland and University College Cork are proud to present the second GRADchances Language Fair in Boole Basement, UCC. This event gives students the opportunity to speak to some of Ireland’s most influential graduate employers, who are currently recruiting students with languages.  Employers exhibiting on the day include Kerry Group, Jameson Distillery, Workday and Dawn Meats, to name just a few. 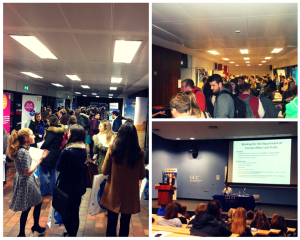 In an increasingly global and connected world, and with Ireland as one of the world’s most open economies, the ability to speak a foreign language is seen as a massive asset and could very much put you ahead of the competition for a graduate position.

It’s a sentiment echoed by Gerry O’Sullivan, Head of International Programmes at the Higher Education Authority (HEA), as well. “The ability to communicate effectively is essential to forging successful relationships. To be able to do that brings a competitive advantage and is extremely useful in building trust and confidence with our overseas partners”.

The Irish business and employers association, Ibec, actively promotes the use of foreign languages amongst workers and hopes the gradireland event will raise awareness amongst students and graduates about how important language learning is for the Irish economy and their future careers.

“Ireland is one of the most open, globalised economies in the developed world, so competitiveness is key. Our companies need to be proficient in the language of their customer”, says Tony Donohoe, Ibec’s Head of Education, Social and Innovation Policy.

“Six years ago the European Council challenged us to move away from an ‘official but lame bilingualism’ of English and Irish to a society where the ability to learn and use two and more languages is taken for granted”, he adds.

Last year’s GRADchances Language Fair in Cork attracted over 200 bilingual and multilingual graduates with fluency in 76 languages, with some even meeting their future employers at the event.

“I introduced myself to the HEA, had a brief chat with them and just left my CV with them not expecting much”, says Mariana Reis from Brazil who graduated from International Business and Spanish in DIT in 2014. Two weeks later she received a phone call which led to part-time work while she finished her degree. She was made full-time at the HEA as an Executive Officer last June. She uses four languages in her role; her native Portuguese, English, Spanish and Italian.

Recruiters will be looking for graduates across a range of sectors particularly engineering, marketing, sales, legal, management and IT while the major European languages, Mandarin and Russian were the most sought after languages, although employers emphasise any foreign language is a major asset.

For more information on the event, see the GRADchances Language Fair here https://gradireland.com/events/248292

This site uses Akismet to reduce spam. Learn how your comment data is processed.

Editor at gradireland View all posts by Ruairi Kavanagh